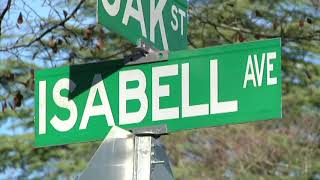 An officer at the right place at the right time saves one life and sends another to sit behind bars. Anniston Police Officer Jonathan Yarbrough rescued a woman from a knife-wielding man late last week. Yarbrough says he was on patrol when he saw a man coming out of an alley near 10th Street and once they locked eyes, the man began to run. After losing him, a neighbor pointed Yarbrough in the right direction. The officer says he acted on instinct. Yarbrough says during the pur 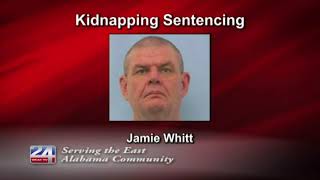 A St. Clair County man is sentenced to life without parole in regards to several felonies. Jamie Whitt pleads guilty to tying a woman up, physically and sexually assaulting her, then forcing her to drive him to a bank and withdraw money from an ATM using her debit card. Later that same day, Whitt robbed a Rainbow City gas station. After getting the money Whitt told the employee to lock herself in the bathroom until he had left. Whitt pleaded guilty to first-degree rape, first 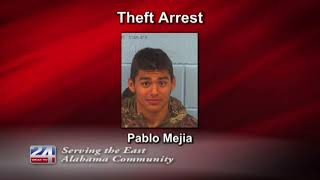 A Piedmont man is behind bars and facing felony charges. Investigators say Pablo Mejia broke into two vehicles on Sand Valley Road. He is accused of stealing a spare tire, jack and air compressor. An Etowah County Sheriff’s Deputy responded to the scene and was able to find Mejia at a home on Oak Road. Authorities say Mejia admitted to breaking into the vehicles in an attempt to repair a flat tire on his own vehicle. Mejia is being held in the Etowah County Detention Center o 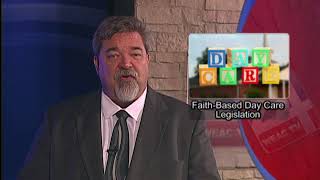 A House of Representatives committee approves a compromise proposal to give the state limited oversight over faith-based day cares. The House Children and Senior Advocacy Committee unanimously voted to send the bill to the House floor. The state of Alabama has a longstanding law exempting faith-based day cares from state licensure and regulations. Under the compromise bill, the centers would remain exempt from getting a license, but the state would be able to inspect the cent 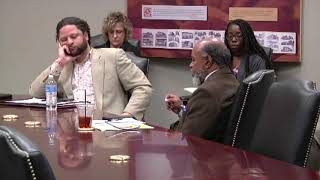 The city of Anniston is looking for a new manager. The Anniston City Council is in the process of filling the position left open by former City Manager, Kent Davis. Anniston leaders held its second in-person interview, this time with Troy Bell. Bell is a former Chief Administrator for the city of Baton Rouge, but he resigned from that position after just 5 days after a local newspaper questioned the legitimacy of his Master’s degree. That paper has since corrected that story 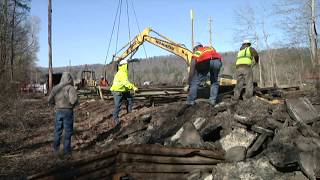 A Calhoun County Bridge Being Relocated 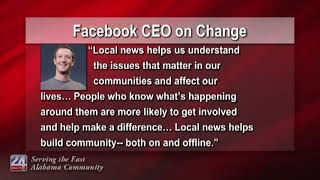 Everyone's favorite social media is changing its focus. Facebook plans to prioritize posts from local news sources in the news feeds of people who live in the communities. Facebook CEO Mark Zuckerburg posted a statement saying “Local news helps us understand the issues that matter in our communities and affect our lives... People who know what’s happening around them are more likely to get involved and help make a difference... Local news helps build community-- both on and o 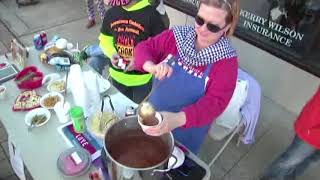 It’s time for an annual event that will have people lining up for seconds. The 11th annual Chili Cook-Off is scheduled for this Saturday in downtown Gadsden. 25 teams are signed up to prepare their mouth-watering recipes. Cookers will start setting up as early as seven am. The rules say that everything must be cooked on site. Tasting tickets are $1 each or $5 for six.The tasting will begin at noon. Cash prizes will be awarded to the first, second and third place teams as well 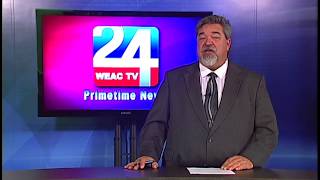 Three Organizations are Coming Together to Help Prepare for Emergencies

Three organizations are coming together to help prepare for an emergency. The Gadsden-Etowah County EMA, American Red Cross and Voluntary Organization Active in Disaster held a training course to educate people on the importance of having a shelter during an emergency situation. This basic training shows participants how to register people and how to make the process run smoothly. VOAD Chair, Craig Scott explains why they hold these training courses.Scott says many churches a 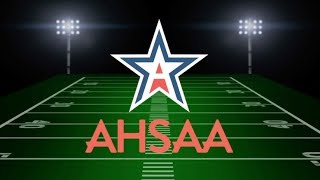 Class 4A Lineman of the Year award at the ASWA annual football banquet in Montgomery. Myers led the Bulldogs to a 12-2 record and a berth in the Class 3A semifinals in his first season at QB (previously a defensive back). And Russell finished his illustrious career with more than 200 tackles in his senior campaign. Below is the full list of ASWA winners including the state's top honor, Mr. Football. (Courtesy: AHSAA - www.ahsaa.com) Austin’s Asa Martin was named the 36th reci
1
2345